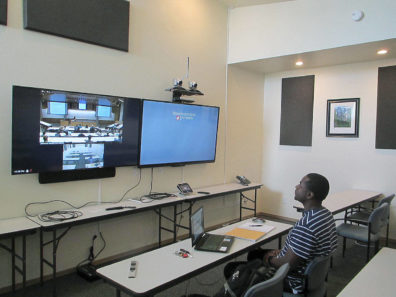 By Laura Guido for the Whidbey News Times

Higher education is now a little more within reach for some on Whidbey Island.

After more than two years of having the capability to do so, the Washington State University Island County Extension at last has students who are enrolled and attending classes there.

The Coupeville office has become the first and only WSU county extension to offer these types of classes, which are attended remotely through video conferencing technology.

For Antonio Barber of Oak Harbor, this accessibility has meant more time with his wife and three children while he pursues a degree in software engineering.

The stay at home dad said in addition to saving the hour and a half each way to Everett, he saves money on gas and childcare through the program.

He and Josh Gowdey are the first two students to take advantage of the video conferencing technology.

Monday morning, Barber observed the lecture slides on one large screen while watching the instructor on another. When he asked a question, the voice-activated system automatically focused the camera on Barber.

Island County residents face unique transportation challenges getting to and from class, which is what inspired Lawrence to look into the system. Gowdey had been taking classes at the Everett campus for a while and had only one left to get his degree, according to Lawrence.

Using the Coupeville classroom, Gowdey has been able to save hundreds in ferry fares and he can continue working his normal shift at Prairie Center.

Barber had been taking classes at the University of Washington Bothell, but said he couldn’t keep making the commute after he and wife started having kids.

He said his family tried moving closer to the school, but it didn’t work out.

“We missed living on the island,” he said.

A friend of his had attended WSU Everett and told Barber that people had the ability to remotely take most of the classes. He started looking into it while finishing his pre-requisites at Skagit Valley College, he said.

One day, he just happened to be passing through Coupeville, noticed the Extension office and decided to do some research online.

Lawrence hopes more people will take advantage of the opportunity once they know it’s there. Almost all the classes at WSU Everett have the video conferencing capability. There are some limitations with lab classes, however.

Some classes from the university’s main campus in Pullman can also be accessed through the system, Lawrence said. In his opinion, this kind of program is exactly what extension offices should be offering, in addition to other normal programs.

“We really ought to be serving all of Island County with all WSU has to offer,” he said.

“Everybody knows who I am,” Barber said with a laugh. “I’m the one guy on the television.”