To Report A Sighting 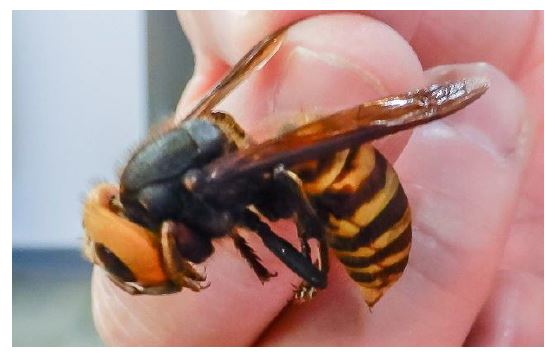 Samples of Asian giant hornet (AGH) (Vespa mandarinia) were positively identified after being found in Blaine, WA in December 2019. This is the first confirmed U.S. sighting of this insect in the wild and only the third in North America, after specimens were found in Nanaimo and White Rock, British Columbia earlier in 2019. After the original detection, three more potential AGH sightings were reported south of Blaine and in Bellingham. Two of these reports were of AGH attacking colonies of honeybees, with beekeepers observing potential hornet activity as far back as October.

These hornets are native to temperate and tropical Eastern Asia and are 1.5-2″ long (world’s largest hornet) with black and dull yellow/orange striped abdomen (Yamane, 1976). AGH creates nests in the ground taking advantage of existing structures such as hollow trees or rodent tunnels. They aggressively attack honeybees and a small group of them can destroy an entire colony, and as such are a serious concern for beehives and native pollinators. AGH can be confused with other species in the same genus so positive identification is needed to confirm their presence.

AGH is also a potential a human health concern as their venom is very toxic and they will attack humans if threatened. If you suspect you see AGH or a nest do not approach and contact WSDA or WSU Extension for more information (see below).

Coordination with US and Canadian agencies is underway and more information on this insect will come as it becomes available.

If you suspect you have seen AGH, a nest, or have a sample, please report via one of the following ways: