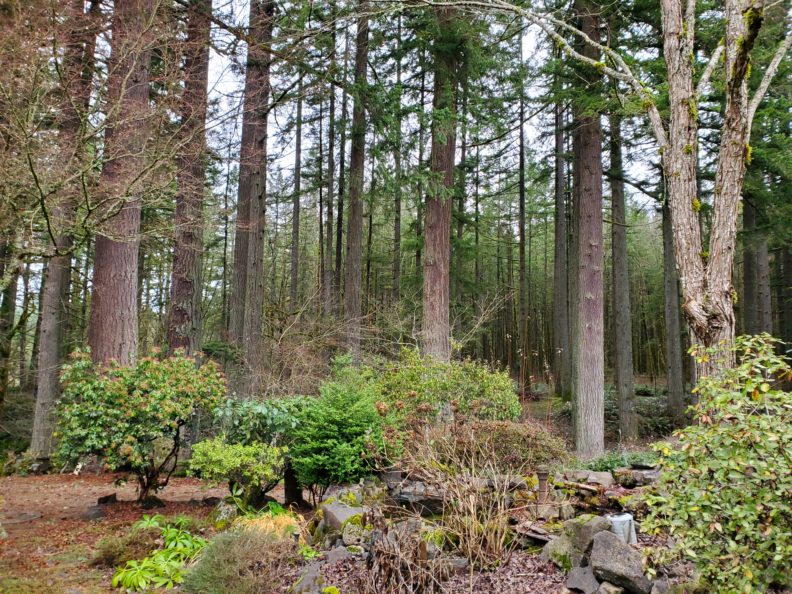 Douglas fir (Pseudotsuga menziesii) is an evergreen conifer species in the pine family, Pinaceae. It is native to western North America and is known as Douglas-fir, Oregon pine, and Columbian pine.

The common name honors David Douglas, a Scottish botanist and collector who first reported the extraordinary nature and potential of the species. The common name is misleading since it is not a true fir, i.e., not a member of the genus Abies. For this reason the name is often written as Douglas-fir (a name also used for the genus Pseudotsuga as a whole).[9]

The specific epithet menziesii is after Archibald Menzies, a Scottish physician and rival naturalist to David Douglas. Menzies first documented the tree on Vancouver Island in 1791. Colloquially, the species is also known simply as Doug fir[6] or Douglas pine[6] (although the latter common name may also refer to Pinus douglasiana).[10] Other names for this tree have included Oregon pine,[5] British Columbian pine,[6] Puget Sound pine,[6] Douglas spruce,[6] false hemlock,[5] red fir,[5] or red pine[5] (although again the latter may refer to a different tree species—Pinus resinosa).[11]

Douglas-firs are medium-size to extremely large evergreen trees, 70–330 ft tall (although only coast Douglas-firs reach such great heights).[13] The leaves are flat, soft, linear, 3⁄4–1 1⁄2 in long, generally resembling those of the firs, occurring singly rather than in fascicles; they completely encircle the branches, which can be useful in recognizing the species. As the trees grow taller in denser forest, they lose their lower branches, such that the foliage may start high off the ground. Douglas-firs in environments with more light may have branches much closer to the ground.

The female cones are pendulous, with persistent scales, unlike those of true firs. They are distinctive in having a long tridentine (three-pointed) bract that protrudes prominently above each scale (it resembles the back half of a mouse, with two feet and a tail).

Pseudotsuga menziesii var. menziesii, the coast Douglas-fir, grows in the coastal regions from west-central British Columbia southward to central California. In Oregon and Washington, its range is continuous from the eastern edge of the Cascades west to the Pacific Coast Ranges and Pacific Ocean.