Historical records document that members of the Lewis and Clark Expedition, William Clark, and a small company of men, walked directly by, where the Columbia Pacific Heritage Museum is located today in Ilwaco, WA, using a Chinook Indian trail, while exploring Baker Bay and Cape Disappointment. This company of men was on this site on November 18 and 19, 1805. The National Park Service certified the Museum as a site on the Lewis and Clark National Historic Trail in November 2001. 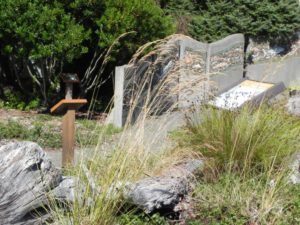 The Discovery Garden as part of the Columbia Pacific Heritage Museum was conceived as part of the Lewis & Clark Bicentennial. The site, behind the Museum and fronting Main Street in Ilwaco, marks the historic shoreline of over two centuries ago that Clark’s party traversed. The Museum includes the Garden and Mariners Memorial Park. The Discovery Garden focuses on native plants that were indigenous to the area when the Clark’s party passed through.

During the following eight years since the Bicentennial, the Garden matured and with no regular maintenance had become overgrown. In 2013, the Master Gardeners of Pacific County approached the Museum and entered into an agreement to use the Garden to: demonstrate environmentally sound gardening techniques based on WSU research; provide experience for WSU Master Gardener volunteers; educate the public, including youth, in science-based horticulture and related topics; and to provide a focal point for public use and enjoyment of the Garden. 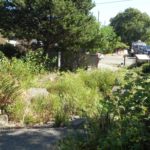 To that end, from 2013 through 2019, the Master Gardeners sponsored three to four workshops a year that were held inside the Museum, touching on several topics – proper pruning techniques, native plants, vegetable gardening in a marine climate, waterwise gardening – to name a few. Master Gardener volunteers were given the opportunity to provide the information and delivery of these workshops. 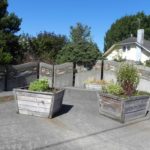 In 2013, the garden was overgrown with weeds – especially with horsetail, morning glory, shiny geranium, creeping buttercup, and other non-native perennial plants. Since then, and continuing into 2021, the Pacific County Master Gardeners have taken over the maintenance of the Garden. We have completed the following projects:

Since becoming the steward of the Discovery Garden many improvements have occurred and the garden is again a welcoming place for visitors.