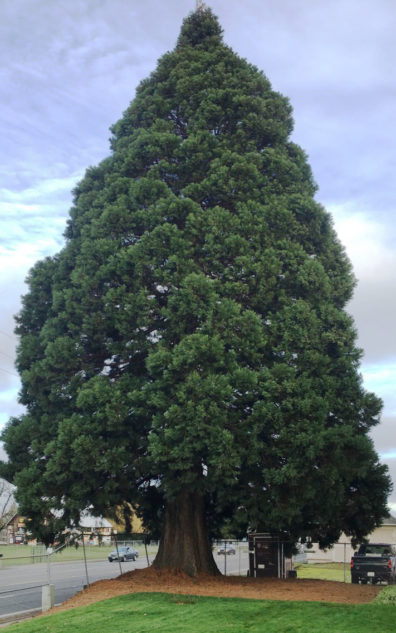 The Giant Sequoia (Sequoiadendron giganteum) is native to a limited area of the western Sierra Nevada in California.  It is one of three species of coniferous trees known as redwoods, the others being the Sequoia Sempervirens (coast redwood) and Metasequoia glyptostroboides (dawn redwood).  The Giant Sequoia are the most massive individual trees in the world.  Average mature heights range 164-279 feet and average mature trunk diameters range 20-26 feet.  The Giant Sequoia is highly adapted to forest fires, having a fire-resistant bark and cones that normally open right after a fire.  Young seedlings depend on fire to clear out faster growing shade-loving trees that would otherwise crowd the seedlings out. Giant Sequoia trees are protected within Sequoia National Park, Kings Canyon National Park, and Giant Sequoia National Monument.

The wood of the Giant Sequoia is highly resistant to decay which make it well suited for shingles and fence posts.  But the wood is also fibrous and brittle, making it generally unsuitable for construction.  Large trees, due to their weight and brittleness, would often shatter when they hit the ground during harvesting, wasting much of the wood.  Harvesting of Giant Sequoia ceased in 1924.  [information source:  https://en.wikipedia.org/wiki/Sequoiadendron_giganteum]

This heritage tree is located at the 78th Street Heritage Farm.  This area was originally settled through a Donation Land Claim in the middle 1850s by William Reese Anderson and his wife Sarah Jane (Sturgess) Anderson, both of whom traveled to the Oregon Territory from the east coast.  In 1871, the property that is now the 78th Street Heritage Farm transferred ownership to Clark County.  By 1873, the county had started a poor farm at the location and maintained the County Poor Farm until the main building was destroyed by fire in 1922, at which time residents and furnishings transferred to the County Poor House on 4th Plain Road.  The current main building at the location was constructed in 1926 and the County Poor Farm once again housed residents.

In 1943 negotiations began with Clark County, the Governor’s office, and Washington State College (now Washington State University) to convert part of the land into an experimental farm under the direction of the college.  In 1944, Washington State College began leasing 28 acres of the Poor Farm.  In 1949, the property was deeded to Washington State College.  Alterations by the College after 1955 included removal of the main entrance on the north side.  An aerial photograph taken in 1968, and available from Clark County GIS, is the first to show this Giant Sequoia at its current location.  Growth rates of this species, according to arborday.org, are 13”-24” per year.  Assuming an average growth rate and a current height of this heritage tree of 91’, planting of this tree is estimated to have occurred near 1960.  It is likely that this tree was planted as part of re-landscaping the north side of the property following removal of the main entrance there.  [History information source:  https://www.clark.wa.gov/sites/default/files/dept/files/public-works/Parks/78th_Street_Heritage_Farm/CC_WA_Poor_Farm_Bldgs_Cemetery_Remote%20Sensing_Project.pdf]