Compare the Asian Giant Hornet with other hornets, bees and wasps here.

Learn more about this emerging pest.

More than two inches long, the world’s largest hornet carries a painful, sometimes lethal sting and an appetite for honey bees. It is also the newest insect invader of Washington state.

“They’re like something out of a monster cartoon with this huge yellow-orange face,” she said.

Cobey, Murray and other WSU scientists are bracing for the giant hornet’s emergence this spring. Sighted for the first time in Washington last December, the hornet will start to become active in April. WSU researchers are working with the Washington State Department of Agriculture (WSDA), beekeepers and citizens to find it, study it and help roll back its spread. 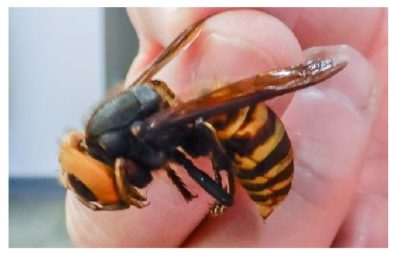 In the first-ever sightings in the U.S., WSDA verified two reports of the Asian giant hornet late last year near Blaine, Wash. and received two probable, but unconfirmed reports, from sites in Custer, Wash.

It is not known how or where the hornet first arrived in North America. Insects are frequently transported in international cargo and are sometimes transported deliberately.

At home in the forests and low mountains of eastern and southeast Asia, the hornet feeds on large insects, including native wasps and bees. In Japan, it devastates the European honey bee, which has no effective defense.

Asian giant hornets are usually about 1.5 to 2 inches in length, with an orange-yellow head and striped abdomen.

The Asian giant hornet’s life cycle begins in April, when queens emerge from hibernation, feed on plant sap and fruit, and look for an underground dens to build their nests. Once established, colonies grow and send out workers to find food and prey.

Hornets are most destructive in the late summer and early fall, when they are on the hunt for sources of protein to raise next year’s queens. V. mandarinia attack honey bee hives, killing adult bees and devouring bee larvae and pupae, while aggressively defending the occupied colony. Their stings are big and painful, with a potent neurotoxin. Multiple stings can kill humans, even if they are not allergic. 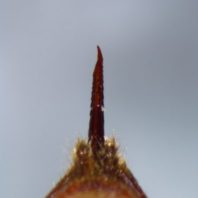 WSU scientists are now spreading awareness of the hornet to citizens and have developed a fact sheet to help people identify and safely encounter the insects. As partners with the Washington Invasive Species Council, they also urge citizens to download the WA Invasives smartphone app for quick reporting of sightings.


What can you do to help?

To report an Asian Giant Hornet sighting, contact the Washington State Department of Agriculture Pest Program at 1‑800‑443‑6684, pestprogram@agr.wa.gov or online at https://agr.wa.gov/hornets.