People love dogs; it’s estimated there are 72 million dogs in the America. Guess how much waste all of these pets produce? Using a conservative estimate, more than 8 billion pounds a year! That’s a lot of poop. Here in Washington State, there are over 1.6 million dogs, and 16,750 live in Clallam County. Dogs produce over 2 million pounds a year in Clallam County alone! Just think what it would be like if people didn’t pick up after their dogs.

Aside from being smelly and unsightly, dog waste can also be a health hazard. Fido’s droppings can contain disease causing organisms and viruses that make people and pets sick and pollute the water. Fortunately, it’s easy to protect yourself, your pets and the environment by scooping dog waste, bagging it and putting it the trash.

Even cute dogs can have germs

can make people and other dogs sick. A dog may not even look or act sick and still carry harmful bacteria or parasites.

Most human illnesses from pet waste are caused by tiny, often invisible amounts of fecal matter that enters the body through the mouth. Children are especially at risk because they play on the ground and frequently put their hands in their mouths. Fecal material can also be accidently swallowed while swimming in water that looks clean but is polluted or eating shellfish that has been contaminated by dog waste left on a beach.

Freshly deposited dog droppings that contain harmful bacteria and parasites such as Salmonella, Campylobacter and Giardia cysts, are immediately infectious to people. But  older, dried-out or disintegrated dog waste is more likely to contain harmful parasite eggs. For example, hookworms take 6-12 days to become infectious and may survive up to 3-4 weeks in the environment. Roundworm eggs must age a week or more in dog stool to become infectious. If feces are washed into the soil and allowed to disintegrate into the ground, parasite eggs can remain viable for years, resulting in long-term contamination of the soil. In addition to posing a threat to human health, dog waste can also harm other pets and animals. Coccidia are parasites that are spread through fecal matter; puppies are most at risk and the disease can be deadly. Parvovirus is transmitted from dog to dog through contact with feces and can be life threatening and is highly contagious due to its hardiness and ability to remain infectious for many months.

Which way to the water?

When it rains, storm water runoff transports pollutants and pet waste pathogens, bacteria, and nutrients from upland areas to nearby streams, rivers, lakes, and coastal waters. Bacteria and other pathogens can contaminate shellfish, which feed by filtering the water. People who eat shellfish harvested from the area can become sick.

How to keep your family, pets and the environment safe

Biodegradable bags are not necessary.

Once in the landfill the plastic may not ever decompose, even if it is biodegradable.

Prevent your dog from pooping near water or a storm drain or ditch.

If you can’t, it’s extra important to pick up any waste that can get to water.

If there is no trashcan, take the bag home. Never leave bags by the side of the trail or toss them into the woods. This just creates two kinds of pollution – pet waste AND plastic waste!

Offer a bag to someone who forgot theirs and consider picking up waste left behind by others. Lead by example in taking care of our parks and natural areas. 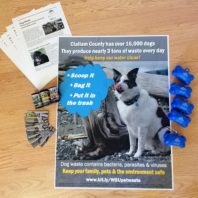 We’ve created a variety of outreach materials and resources for Clallam County. Feel free to download and adapt for your own use.

Scoop that poop song! By Steve Urbanc, filmed by Al Bergstein, recorded by George Rezendes. Sing along with the Dog poop song lyrics.

Citations from literature search conducted for this project.

The photo below shows dog waste right next to a waste station stocked with bags. The waste is right on a trail leading to the beach where families dig clams.  A heavy rain or a high tide could sweep this bacteria-laden pet waste right into the water where it could sicken people and pets. It could even cause regulators to close the beach for shellfish harvesting. If you see this, please consider picking it up, even if it isn’t from your dog.

Let’s work together to keep water clean and beaches safe.

Clean water is good for everyone, even hot dogs on a summer day. 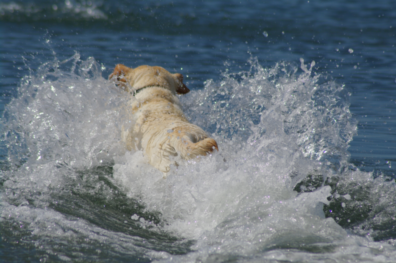