Long before electricity was discovered and harnessed, humans used the power of running water and wind. 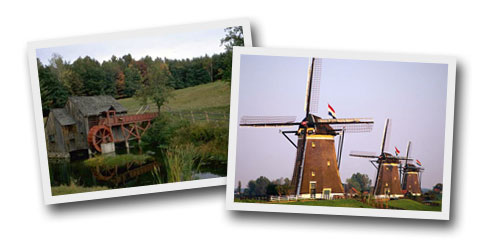 Using simple gears, these old fashioned mills were used to cut lumber or grind corn. When the electrical generator was conceived, the mills were adapted to spin generators.

Electricity is not considered a non-renewable or renewable resource. It is called a secondary resource because it is generated through mechanical means. Inventions throughout time have helped us create and utilize electrical energy, and now it seems we could scarcely exist without it. One of the best things about electricity is that we can use our natural renewable resources to generate it. Solar power, wind power and water power can move turbines that spin electrical generators. It is a fairly simple operation which has vast reaching consequences.